As you know, we have had several incidents with vehicle burglars recently. This is a very common type of crime, where thieves on foot go down the streets late at night, checking each parked vehicle to see whether the doors are locked or not. If the doors are unlocked, they quickly steal anything and everything they can. However, when they find locked doors, they just skip that car and go to the next one. They are probably being dropped off and picked up by a vehicle because police told us that they will typically hit several subdivisions in the same night. Also, suspicious vehicles were seen in Spring Lake around the time of these incidents.

Each time, our Flock entrance camera system provided images to law enforcement. The police cannot give out any details, but they did say that they are pursuing active leads. We believe that they found the data from our Flock cameras useful.

We have spoken to many police officers about this. Just yesterday we met one on one with a veteran detective who has extensive experience dealing with this type of crime. Here are the important points we have learned:

REMEMBER – DO NOT CONFRONT CRIMINALS YOURSELF! IF YOU SEE THEM COMMITTING A CRIME, CALL 911 AND LET THE POLICE HANDLE IT!

Since the DR Horton section is not going to be tied into the rest of Whispering Springs for some time, we were able to save money by not immediately putting a Flock camera on Garnet Lake where it connects to that section. However, DR Horton’s gravel construction entrance is now providing a back way to get in, so our Garnet Lake camera is being installed this coming Thursday, May 7th, at the property line on Garnet Lake. It will capture all southbound traffic coming into our subdivision from the DR Horton section. Understand that even though that is called Spring Lake 8th Filing, it is legally a part of Whispering Springs and its HOA. They have nothing to do with us whatsoever; they do not pay dues to us nor have any right to use any of our common areas at all. Our Flock cameras cover us, not them. 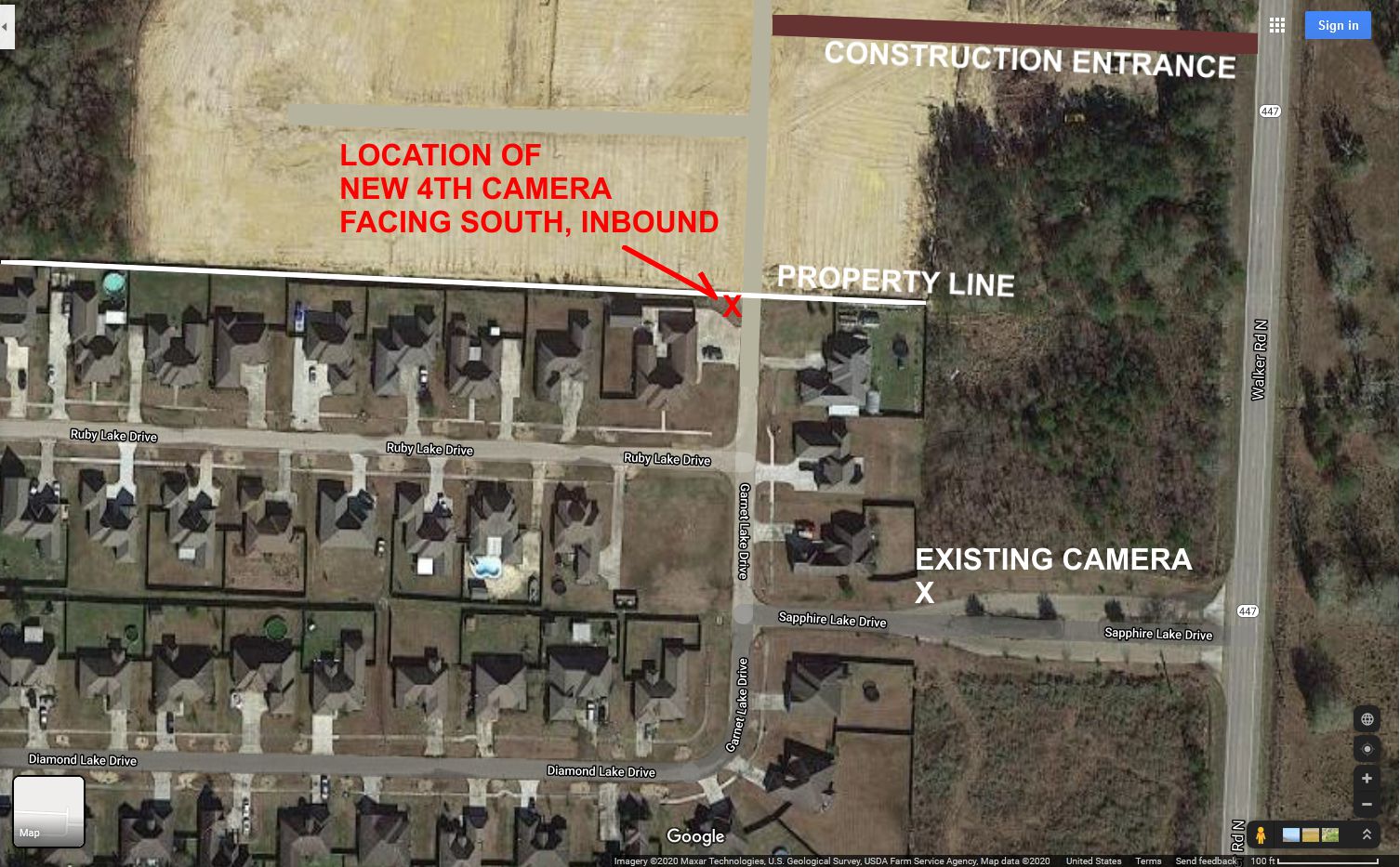 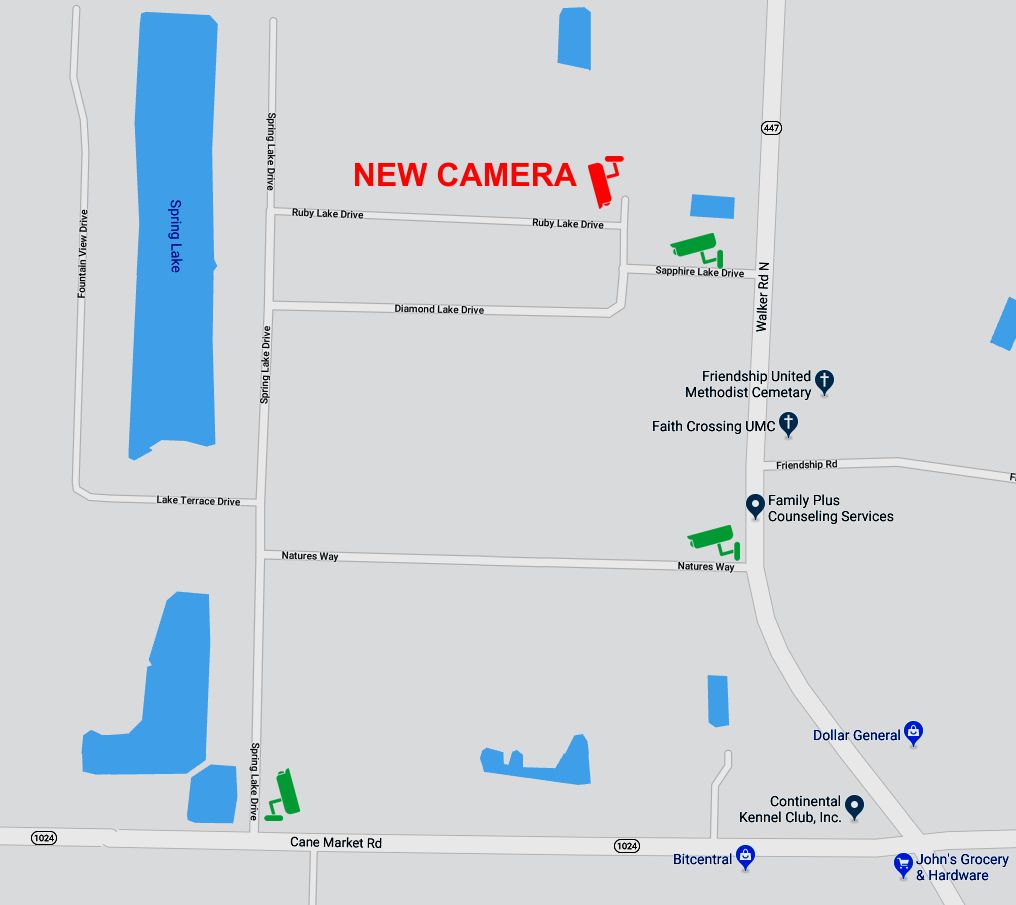 In addition to the entrance cameras, we have been extensively researching ways of getting images from the streets and sidewalks within our subdivision. Such images would be crucial in matching the individuals shown on home security cameras with the vehicles recorded by the Flock system. We believe we have found cameras which will do the job while still being very affordable. Several of these placed at strategic points will give us a new level of security, greatly increasing the chances of getting conclusive evidence necessary to make a solid case against criminals here. We’ll keep everyone updated on the status of these new cameras.

Motion-sensing LED lights have been installed at the park and elsewhere. Some of these are temporary, and will be replaced by more powerful lights after AC power is run. We have received the proposal for getting the electrical work done at the park, and it will begin soon. This will enable the installation of the new fountains, security lights, cameras, and more.

Here are some of the lights we have in use, which have performed well and are very inexpensive. Clicking on the pictures will take you to the Amazon listings for these lights. 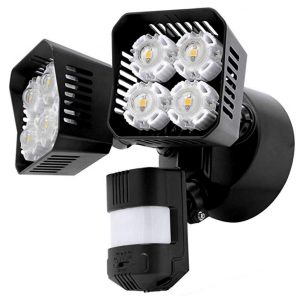 Given the Covid-19 shutdown, we were being lenient about verifying that people fishing or walking at the park were residents. Unfortunately, that leniency was abused, and in recent days groups have been caught in the park hanging out after dark, drinking, littering, etc. Therefore, trespassing at the park will no longer be tolerated. If you see people in the park at night, call the police! Our park is beautiful, is paid for by everyone’s dues, and we WILL NOT allow people who don’t live here to come in and ruin it. In addition to cameras and lights, we may install a 2nd gate to prevent vehicles from using the park driveway as a clandestine parking area at night. We also may use a method successfully employed by other subdivisions, which is to issue each homeowner a park pass (a badge on a lanyard, probably) which must be carried when at the park. It’s a shame such measures are necessary, but it seems that many who don’t live here now think our park is theirs to abuse, which it is most certainly NOT!

We are strongly committed to stopping crime in Spring Lake, and assisting law enforcement with catching and convicting anyone who tries to commit crimes here. To help with that effort, we encourage everyone to always lock your vehicles, be alert, report suspicious activity, install motion lighting, and install cameras if you can. High-quality camera systems from Arlo, Ring, and many others are readily available. We learned that law enforcement can be granted access to Ring videos voluntarily uploaded by homeowners. (For details on how this works click here.) Ring cameras are very popular, so this is another valuable tool to help catch thieves and put an end to this problem.

The harder we make it for criminals here, the more likely they are to skip our subdivision and go after easier targets.

There is much more coming very soon, so look for additional updates as things progress!